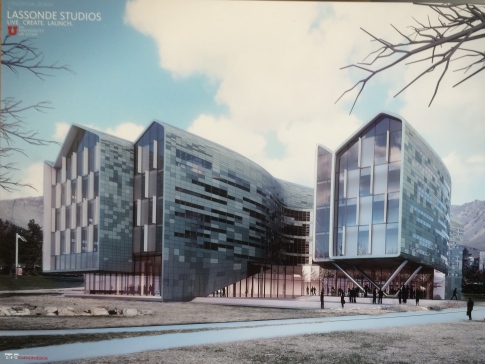 What would you do if you had an extra $25 million? If you’re like Pierre Lassonde, you’d perform a massive act of philanthropy and donate that money to an institution of higher education, like, say, the University of Utah. And this would probably be just one of the multimillion dollar gifts you’d given to colleges and universities across North America.

A native of Quebec, Pierre earned his MBA at the University of Utah in 1973 before going on to have a successful career in the mining industry.

I attended a luncheon at the University of Utah today where Pierre was honored and the Lassonde Studios— a new building he’s contributing to— was unveiled.

The Lassonde Studios will be one of the most unique buildings on any campus in the United States and will combine living and working space for as many as 400 student entrepreneurs.

If you check out the building concept video you’ll see that this $45 million building, slated for completion in 2016, is as beautiful as it is innovative. It’s a fitting design to host a unique program that will bring together students from all backgrounds and interests, from humanities and arts to science and engineering, from medicine to business and more.

In addition to being impressed by this project, I was touched by Pierre’s comments today as he shared a few things he’s learned during his career.

His first rule of business is to say “Thank you.” He advises that if you’re asked to give a speech, make sure it’s no longer than ten minutes.

He said that entrepreneurs often don’t actually start with a vision, they start with an idea. As they explore and move towards their idea it commonly becomes a vision, but the vision doesn’t usually come at the beginning.

He encouraged entrepreneurs to start small. Failure is likely, he said, and when you fail, you’re going to lose money. By starting small you’ll lose as little as possible, but you’ll learn a lot. Your success will grow as you go.

He said that all good things take five years.

For Pierre, what it all leads to is giving back. His three T’s of philanthropy are Time, Talents and Treasures, and it’s important to share all three. And we don’t have to wait until we’re successful before we can share our three T’s. That’s something we can do today.

My mid-life crisis included the purchase of a black Ferrari with yellow calipers and stitching, and it happened in my early thirties. I hope that doesn’t mean that I’ll only live to be sixty-four, the age my dad died, because that’s just way too young.

When I was eighteen I thought thirty sounded old. Back then I had both ears pierced, along with my tragus and my tongue. I swore that when I turned thirty I’d remove all my piercings and never wear one again. I thought that being over thirty and wearing piercings was just trying way too hard to hold on to being cool.

Then, before I knew it, I was thirty. I didn’t feel any different than I did when I was eighteen. Honestly, I didn’t feel much different than I did when I was eight. I did remove all my piercings, but all of the sudden fifty didn’t sound so old. I knew I wanted to be running marathons, motorcycling, skiing, traveling and spending active, meaningful time with my wife and kids into my eighties and beyond.

I decided to die broke and never retire.

Don’t get me wrong. I don’t mean to go broke by spending all my money. If the Ferrari definitively taught me anything it’s that money really can’t buy happiness.

Instead, I’m inspired by my dad’s thought that “Money’s just numbers on paper and a tool for doing good,” his direction to “Go about doing good until there’s too much good in the world,” and Andrew Carnegie’s perspective that “The man who dies rich, dies disgraced.” “Besides,” Carnegie wrote, giving his fortune away “provides a refuge from self-questioning.”

I determined to find a career that allows me to do work that I’m good at, that I enjoy, and that serves other people. I resolved to create, at least in concept, the future I that want now and to live into it a little bit more each day. I have learned to responsibly manage money, and this year I’ll establish a foundation in order to further the cause of freedom and to assist individuals in developing countries.

It’s been three and a half years, there’s snow outside, and I’m still paying for the Ferrari.

How Buying a Ferrari Heralded My Mid-life Crisis